BENTIU, South Sudan – Since the COVID-19 pandemic arrived in South Sudan in April, more than 2,000 cases of the illness have been recorded. Tensions are rising within families and communities, leaving women and girls vulnerable to violence as they attempt to isolate or escape from the virus.

“Women suffer in the hands of their partners. Intimate partner violence is worse with the COVID-19 situation,” said Poni Rose Modo, a South Sudanese social worker at a UNFPA-supported women-friendly space.

She works at a facility located inside a camp – known as a Protection of Civilians (POC) site – in Bentiu, which is home to more than 111,000 displaced people.

In November 2018, Bentiu gained notoriety after reports of mass rape among women and girls who left the camp to gather firewood. Despite widespread condemnation of the violence, women and girls remain as vulnerable as ever. Rape is still reported on a regular basis.

“Women and girls in Bentiu are highly vulnerable to gender-based violence,” Ms. Modo said. “They are often the ones responsible to provide food for the family, including doing mundane tasks as gathering firewood outside of the POC – this is where the physical assaults and rape by armed men commonly happen.”

Today, after years of civil war and the recent formation of a unity government, more than 180,000 displaced people are living in POC camps throughout the country. Experts fear COVID-19 could spread easily amid the sites’ crowded conditions.

Many families are choosing to leave. But the experience of armed violence and sexual assault remain fresh – and reports of clashes and sexual violence persist around the country – leaving many women reluctant to leave the protected sites. The issue is increasingly the cause of disputes within families, Ms. Modo says.

But staying home is not necessarily safe, either. As in many other places, women sheltering at home could be vulnerable to domestic violence.

Girls are also more vulnerable to harmful practices. “The closure of schools due to COVID-19 has also created an opportunity for parents to marry off young girls for money,” Ms. Modo noted.

Data on gender-based violence are always difficult to obtain, and under the pandemic, these challenges are only elevated. But there are indications that the situation for women and girls may be worsening.

There have been increased reports of gender-based violence in the media, for instance, and UNFPA’s partners say communities are finding increased incidence of violence. Yet the number of people receiving support from UNFPA’s “one-stop” centers – which provide health, psychosocial and legal support to survivors of violence – has declined, as people forgo care during the pandemic.

Ms. Modo has spent seven years working on front lines of much of that violence, providing counseling and case management to survivors. Despite the steep challenges and frustrations of her work, she remains committed.

“I understand the pain that women and girls go through, and I feel that I should continue to try to bring positive change into their lives,” she said.

But she wants to see leaders show the same level of dedication: “All it takes is for the government to enact and implement laws that will protect gender-based violence survivors. I believe that once perpetrators are punished, it will set a precedent for others to stop committing crimes against women and girls. And this will only be possible when genuine peace is in place.”

Until then, she will continue her work. Not even the pandemic can stop her.

Her women-friendly space remains open, as do the one-stop centers. Both are supported by the International Rescue Committee and the Ministry of Gender, Child and Social Welfare. UNFPA has also supported the creation of a toll-free nationwide helpline for survivors of violence.

“I am optimistic that one day women will be able to fully embrace their rights,” Ms. Modo said, “and proactively fight for them.” 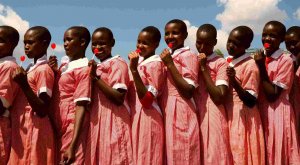 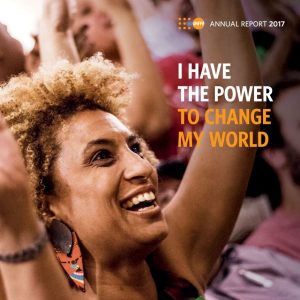 UNFPA’s Annual Report 2017: I Have the Power to Change My World 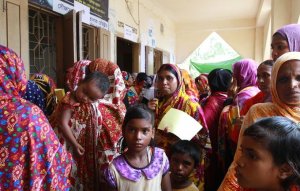 Providing care during a pandemic and a refugee crisis: UNFPA’s work with Rohingya Refugees